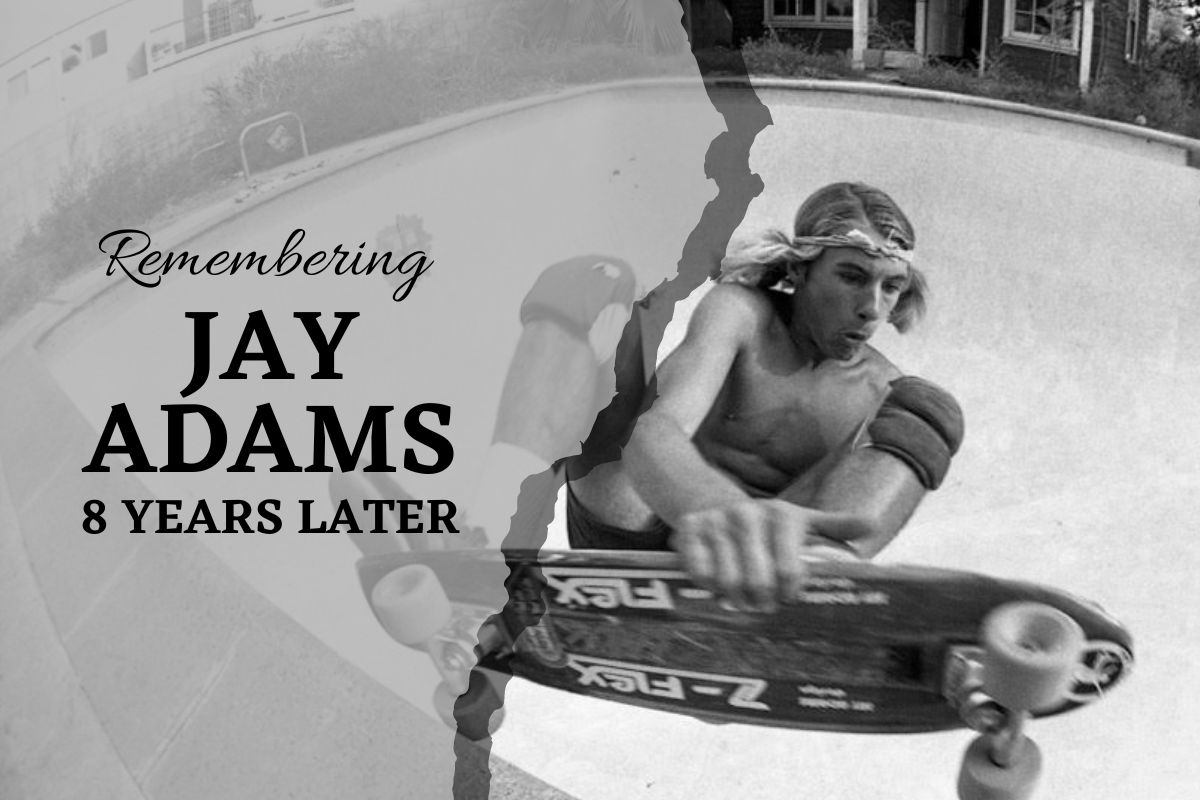 August of this year marks 8 years since the passing of legendary Z-Boys skateboarder Jay Adams, who tragically died from a heart attack. The curtains on his inspiring life fell on August 15, 2014, in Puerto Escondido, Oaxaca, Mexico. Born on February 3, 1961, he was incredibly popular in the dogtown scene during the 1970s that our Santa Monica coffee shop celebrates each and every day.

Long before the best Santa Monica coffee was a thing, Adams joined the Santa Monica-based Zephyr surf squad, sometimes known locally as Dogtown, in 1974 when he was just 13 years old, representing Jeff Ho Surfboards and Zephyr Productions. Tony Alva, a fellow Z-Boy, famously once said of Adams, “some kids are born and raised on graham crackers and milk; he was born and raised on surfing and skateboarding.” When the Z-Boys learned about the 1975 Bahne-Cadillac Del Mar Nationals, they decided to form a skate team.  Adams was the first competitor, placing second in the Junior Men’s Freestyle competition, which was held at Del Mar, California.

The Z-Boys’ style was distinguished by his explosive energy and low, bold, surf-like maneuvers in contrast to the conventional style of the time, which was still built on gymnastic-type feats developed in the 1960s. In the 2001 documentary Dogtown and Z-Boys, which was about the squad, Adams was referred to as having “an athletic stream-of-consciousness” for his capacity to transform close calls into previously unheard displays of elegance and agility.  The “Dogtown Chronicles” by photojournalist and author Craig Stecyk, which appeared in the 1975 relaunch of Skateboarder Magazine, is largely responsible for Adams’ and the rest of the Zephyr team’s renown.

The Z-Boys, who over the course of two years rode deserted swimming pools in Southern California, laid the groundwork for vertical skating, and their exploits were recounted in a series of magazine stories. Skateboarding became a feasible profession because of the global exposure of Stecyk’s Dogtown articles and industry support. Adams was one of the first skateboarders to be pictured “catching air” (time spent in the air after launching) above a swimming pool’s edge at the age of 15.

However, things were not always sunny for Jay. After losing both of his parents, grandfather, and his brother all during the same year, he became addicted to heroin in response to his deep grief. Like any of us, he had his own vulnerabilities. A few years later, he would break free from his addiction and begin speaking to local students about his struggles. He wanted young people to learn from his past mistakes so that they would not go down the same path he did. Unfortunately, despite his good intentions, he would struggle to keep clean in the years ahead.

On August 30, 2014, a memorial funeral service for Adams was held at Venice Beach, California, near our Santa Monica coffee shop; surfers and skateboarders from all across the nation paid tribute by participating in a traditional paddle-out ceremony in the Hawaiian way. At the Venice Beach Skatepark, friends Tony Alva and Christian Hosoi staged a memorial skate session for Adams. Adams is honored with two murals in the Venice region. One is at the Santa Monica construction site of the first Zephyr Skate Shop. The other is on the inside of the bowl at Venice Skatepark and features Adams and late Dogtown rider Shogo Kubo.

From everyone at the home of the best Santa Monica breakfast, we thank Jay Adams for his cultural contribution to the Dogtown community. While we may all be mortal, the messages we put out during our lives practically immortal can last for generations. This is certainly true when it comes to the legacy left behind. We firmly believe he will continue to inspire future Dogtown enthusiasts for many years to come.

Facts About Santa Monica High School
Check Out These Events Going on in August 2022!
Advertisement