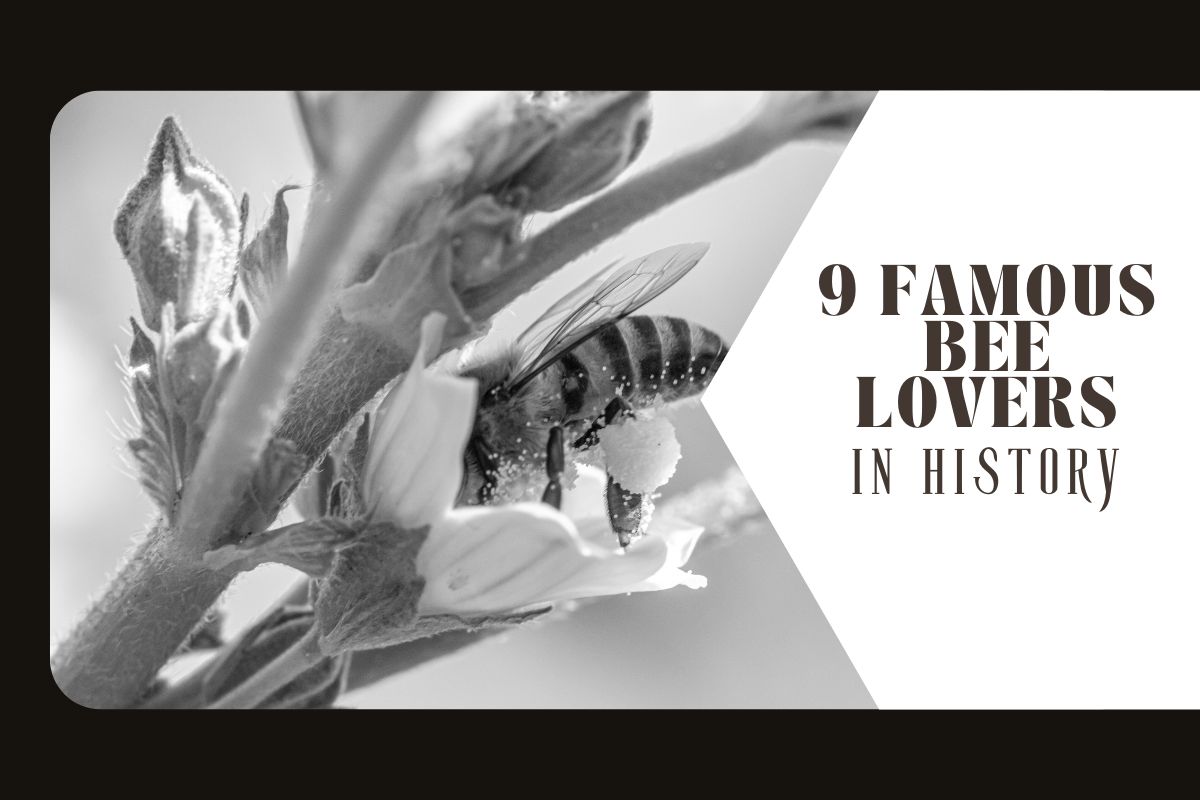 For those unfamiliar with beekeeping, beekeepers might be seen as eccentric and quirky. But did you know that beekeeping has been a popular pastime since time immemorial? Indeed, plenty of famous figures in history have had passions for beekeeping, especially nowadays when the conservation of bees is at its most important.

Look down the list and you’ll find that you’ll recognize most, if not all, people on this list! Like us, these famous figures think bees are the bee’s knees!

Aristotle is a Greek philosopher, scientist, poet, musician, linguist, economist, logician, and plenty others. If that wasn’t impressive enough already, he was also a beekeeper!

He was fascinated with animals and frequently studied bees in their hives. In fact, he called bees “divine” and “political animals” because of the natural social hierarchy in the colony. While many of his theories about bees are no longer true (e.g., a king bee instead of a queen bee, that bees find baby bees in flowers), he was still a notable figure in beekeeping in the ancient world.

Leo Tolstoy is a Russian author that is often regarded among the greatest authors of all time. His most famous works include War and Peace, Anna Karenina, and The Death of Ivan Ilych. Interestingly, many sections in his books mentioned bees—Tolstoy frequently drew comparisons between the life of a bee and the life of a human in his body of work.

According to Tolstoy’s wife, Sophia, “He is crouching in front of his hives, net over his head. The apiary has become the center of the world for him now and everybody has to be interested exclusively in bees!”

Maria von Trapp was a matriarch figure in the famous Trapp Family Singers. They were the inspiration behind the classic film, “The Sound of Music”.

After fleeing Austria during the Second World War, Maria von Trapp settled in Vermont along with the rest of her family. Her husband encouraged her to pursue beekeeping, and since then her farm has been a leading producer of honey in New England since 1868.

We know that Sherlock Holmes is a fictional character, but we love him so much we just had to include him!

Do you know who doesn’t like Sherlock Holmes, though? His creator himself, Sir Arthur Conan Doyle. Indeed, Doyle was so sick of writing about him that he forced the character into retirement, where the genius detective found himself in southern England happily tending to his bees.

Martha is the queen bee of home living! Her desire for homegrown produce and honey led her to beekeeping, an activity she described as “something so romantic”. Nowadays, she’s a strong advocate for saving the bees, and she wants to educate others on the bees’ important role in pollination.

According to her, “My gardens are never more beautiful than they are when these creatures are pollinating and encouraging flower development and vegetable production.” We can only imagine how gorgeous her garden must be!”

Sir Edmund Hillary was one of TIME’s most influential people in the 20th century. He was a New Zealand mountaineer who was the first to climb Mount Everest and visit the North and South Poles.

As a young man, he was hired by his father to tend to their apiary. His father was a beekeeper who owned over 1600 hives and nearly a hundred pounds of honeycomb. During the summer, he earned enough to fund his climbing adventures during the winter.

If you really think about it, Sir Hillary managed to do all his feats because of his love for bees!

Henry Fonda was an American film and stage actor, often recognized as one of the greatest legends of Hollywood’s classic era.

Between filming scenes, Fonda would frequently hand over jars of “Henry’s Honey” to his co-stars. This honey was sourced from his own beehives on his Bel Air estate, where they fed on plenty of lemon and orange trees.

Sylvia Plath was a famed American poet who wrote “The Bell Jar” and “Daddy”.

Speaking of which, Plath’s father, Otto, was an expert in beekeeping and probably inspired Sylvia’s love for bees as well. She owned plenty of beehives in her home in Devon, though the rest of her life was far from happy. When she was suffering from depression and a deteriorating marriage with her husband, Plath started writing poems about bees that described her inner thoughts and feelings.

Here is an excerpt from her poem, “The Swarm”:

“Will the hive survive, will the gladiolas

Succeed in banking their fires

To enter another year?

What will they taste of, the Christmas roses?

The bees are flying. They taste the spring.”

Morgan Freeman is an American actor, director, and narrator who has won several awards including an Academy Award, Screen Actors Guild Award, and a Golden Globe Award. But did you know he’s also got beekeeping in his arsenal?

On the Tonight Show Starring Jimmy Fallon, Freeman described how he converted part of his Mississippi home into a bee sanctuary. In the interview, he notably said people had to “resonate” and “become one” with the bees to avoid being stung by them.

Beekeeping isn’t for everybody. However, the next time you find an unwanted swarm of bees on your property, please choose to save them instead. The Bee Man is a bee and wasp removal in Irvine company serving Los Angeles and Orange County like Irvine that can help you with that. Please contact us at (949) 455-0123 to get started.

You may also like...
Related Topics:bee and wasp removal, bee removal Irvine

Bee Swarms and Their Purpose
Advertisement