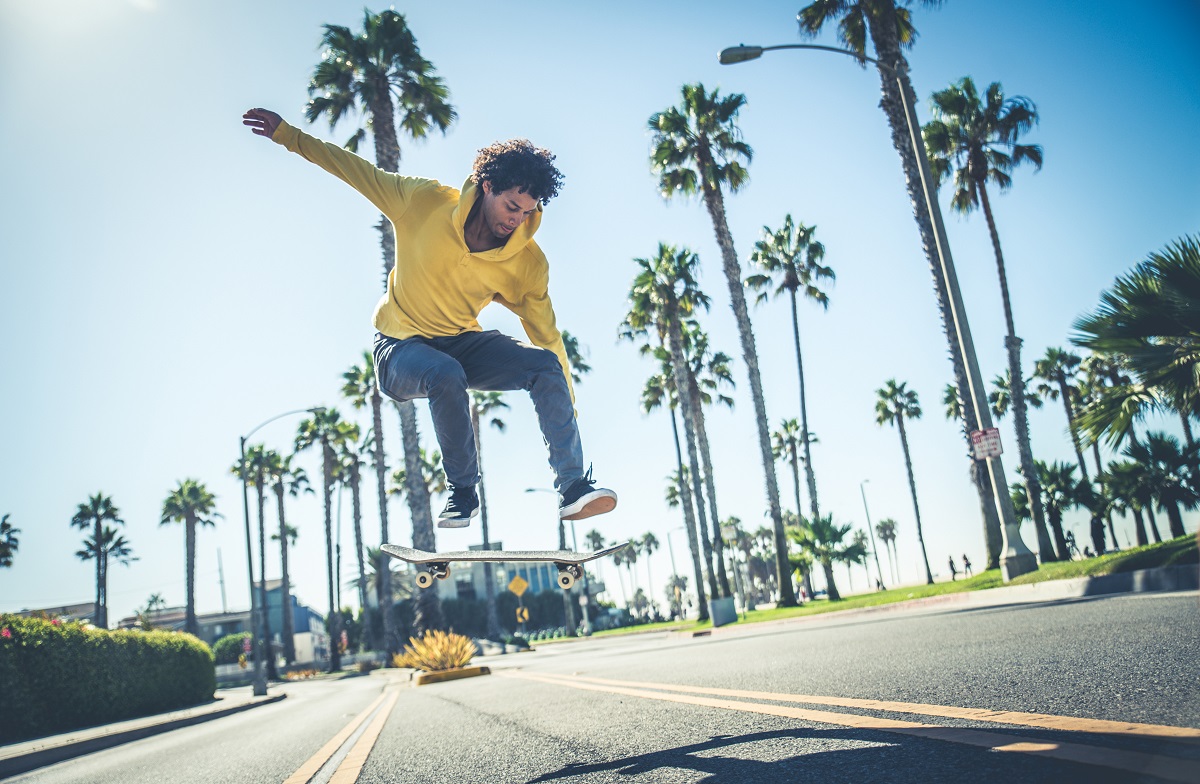 You already know Dogtown Coffee as your one-stop shop for breakfast in Santa Monica, but how much do you know about the rich history of southern California skateboarding that inspired our business? Are you familiar with it? If you’re new to the world of skateboarding, this article will make a great introduction for you.

Long before our famous Santa Monica coffee shop came to be, skateboarding was actually first created here in California in the 1950s. Rollerblading became popular during this decade, which inspired people to start putting wheels on boards and not just shoes. They were designated as an activity for people to do when the waves were too low to go surfing.

During the early and mid-1960’s was when skateboarding really began to take off in popularity. Val-Surf in Hollywood became the first to sell their own skateboards. The Hollywood location was also the very first Val-Surf store to ever open in October 1962! The store would later re-locate Whitsett Avenue, where it is still in operation today. Skateboarding became an activity associated with the outcasts and those that traditional parents at the time didn’t want their kids hanging out with, but that didn’t stop people from pursuing their passion for this awesome and respectable hobby.

The first National Skateboarding Championships took place in 1963 in Hermosa Beach, CA.The 1965 competition was televised on ABC’s Wide World of Sports from Anaheim, CA. Such competitions are still being held today. During that same year, the world’s first skatepark, Surf City, opened in Tucson, Arizona.

Skateboarding is featured in many popular movies and television shows throughout the decades. You most likely remember Marty McFly’s signature skateboard in the Back to the Future movies, and do you remember when Back to the Future Part II attempted to predict what the future of skateboarding would be in the year 2015 with hoverboards? You might also remember the show Rocket Power, a cartoon created by former spouses Arlene Klasky and Gabor Csupó who continued to work together in the animation industry even after the end of their marriage. The show broadcasted on Nickelodeon from 1999 to 2004 about four young friends who enjoy skateboarding. The pair also created The Rugrats in the late 1980s and early 1990s.

Skateboarding’s influence on culture also spawned the careers of many names you are most likely familiar with, including Rodney Mullen and Tony Hawk, who also has a countless number of video games based off of him.

There is much less of a negative social stigma around skateboarding today, which there should have never been in the first place! In 2018, research found that among the millions of skaters scattered across the world, there are more adults and girls skating than ever before! This all comes to show how far progress has been made over the decades to ensure that skateboarding is a hobby that is inclusive for everybody, regardless of age or gender, and that it is no longer erroneously labeled as an activity for the “bad kids.”

Skateboarding was even introduced as a sport in the 2021 Tokyo Olympics, with Japan winning the most gold medals among competitors. If you’re looking for the spot where skateboarding is most popular, you’ll have to either take a road trip or catch a plane up to San Francisco. If you have any business in Australia (which now you totally do!), you can also fly to the country’s capital. It also happens to be rated as one of the safest cities in the world!

Come on down to Dogtown Coffee

If you’re ready to experience Santa Monica breakfast like none other in the spirit of the legendary skateboarders that came before us, come on down to Dogtown Coffee here on 2003 Main St. Monday through Saturday 7 am to 2 pm! You can also get our products delivered via your favorite delivery app such as DoorDash and GrubHub. You can also place an order for pick up by calling our Santa Monica location at (310) 310-3665. We can’t wait to have you!